It is a while since I last posted. This year we have decided to go to the Khurkh Bird Ringing Station to the east of Mongolia.

We have arrived at Ulanbaatar airport Mongolia after the two long flight journeys. Tomorrow we have a 400km taxi drive to the ringing station. 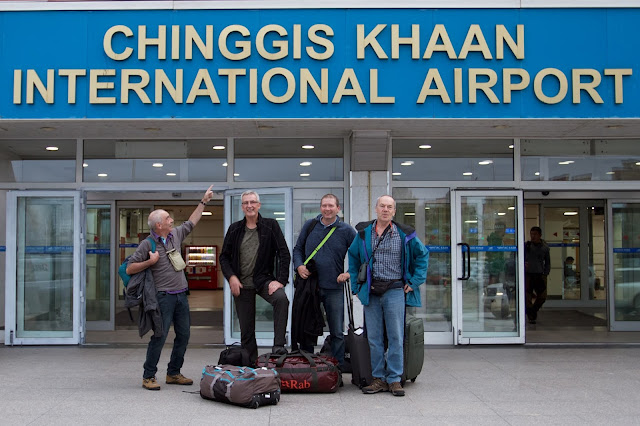 They have a reputation of catching excellent birds, 113 species last year. Below is a link to their Facebook page which makes some interesting reading.

All being well if internet access allows there will be further blogs with pictures and stories of birds we have caught and processed.

Review of August and September in Llanfynydd

For the first part of August I was in Norway. This has been my 3rd trip to the Arctic, twice to Varanger and once to the Pasvik valley. The number of birds we caught this year as in other years was phenomenally great, but tiring and it was nice to get back to the real world to catch up on sleep and and spend a bit of time on my own two sites Ffynnon Gro and Fygyn Common. The last week in September I am away in Portugal going to the same site Parque Ambiental in Vilamoura as we did in the spring this year and also in previous years as well

If you compare my sites to Norway and Portugal there are no comparison in terms of numbers and it would probably be true to say the numbers on my sites in each of recent sessions but the last two were not as good compared with this time last year. I have noticed the feeders are remaining virtually untouched and all the Siskin seemed to have disappeared completely. However you have to take the rough with the smooth and carry on. The big surprise was a new bird for me, a Tawny Owl. A lovely bird like this really makes up for slow action.

Below are the total birds I have caught on my own sites sandwiched between my visits to Norway and Portugal. I have also had some excellent ringing on the Teifi Marshes a group which I am a member of and was also introduced to catching and processing Swans with Paul Ashworth and Tony Cross in Shropshire. 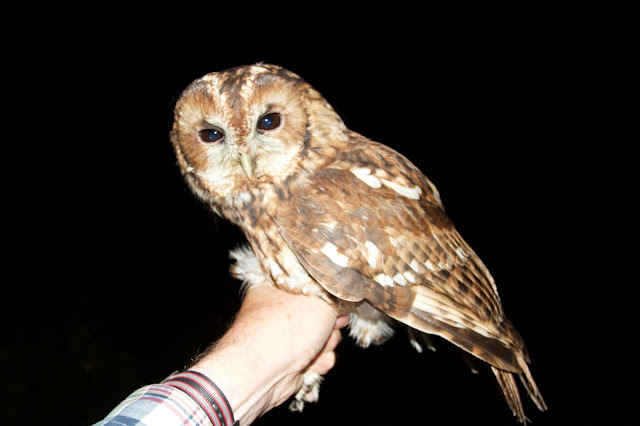 Whilst trying to catch a few Swallows it came as a big surprise when I went to the net to pack up to see this Tawny Owl sitting in a net pocket just looking at me looking at it. By its wing length of 269mm and weight of 510gms I concluded it was a female.
A male bird has a wing less than 255mm and a weight less than 400gms
A female bird has a wing greater than 268mm and a weight greater than 434gms
Source data Baker
This being my first Tawny Owl I can say extraction was easy and when in the hand it just lay back in my arm like holding a baby, I was pleasantly surprised. 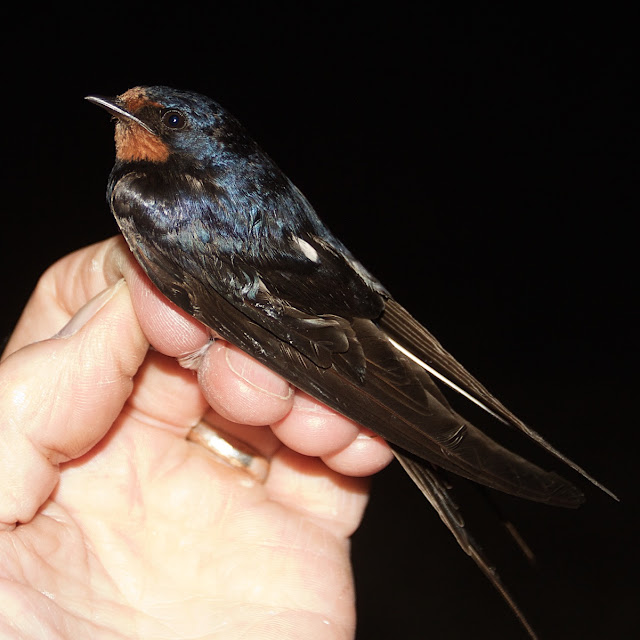 The total number of Swallows was 56 birds. These birds were not coming to roost and to be honest I have not yet found their roost. If I had found it no doubt the numbers would be in the hundreds. They, I believe came to the sound by my nets out of curiosity, confirmed by the small number being caught, up to 5 or 6 at a time and occasionally less. A few sessions were therefore needed to get the number I did catch. Probably 10% were adults like the bird in the picture and the rest juveniles. 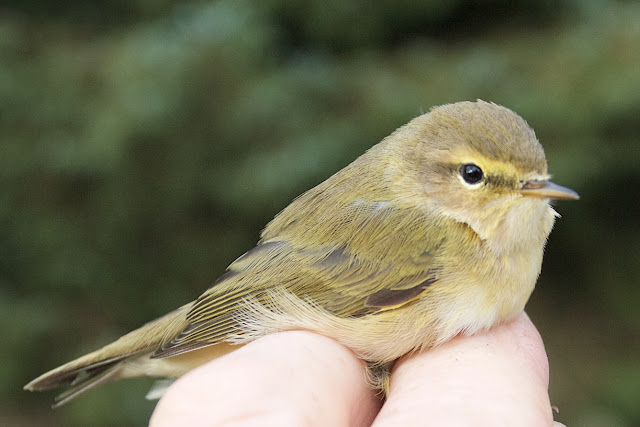 Chiffchaff numbers were all from Fygyn Common. There has been a few about this Autumn and I have noticed that other sites I have been going to on The Teffi Marshes have also been catching some good numbers. 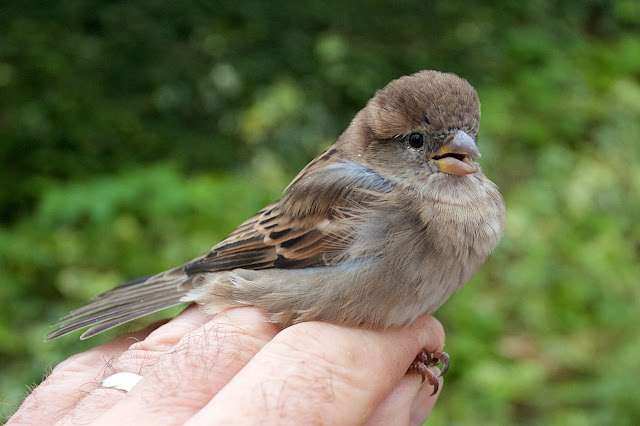 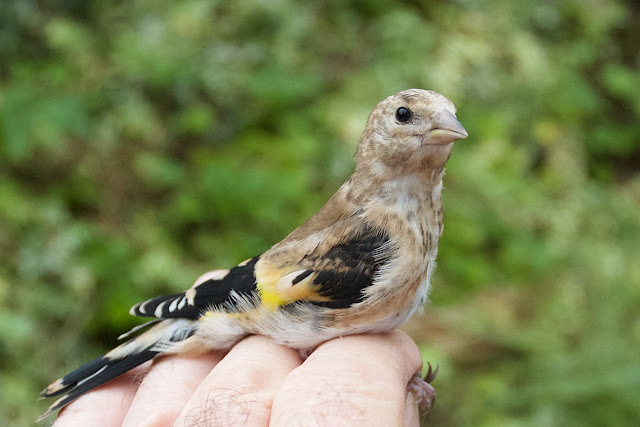 Juvenile Goldfinch at this time of year look quite plain but as Post Juvenile moult progresses then the characteristic red head feathers start to appear. When looking carefully at the head feathers when you think there isn't any you can often find the odd red feather starting to peep through. 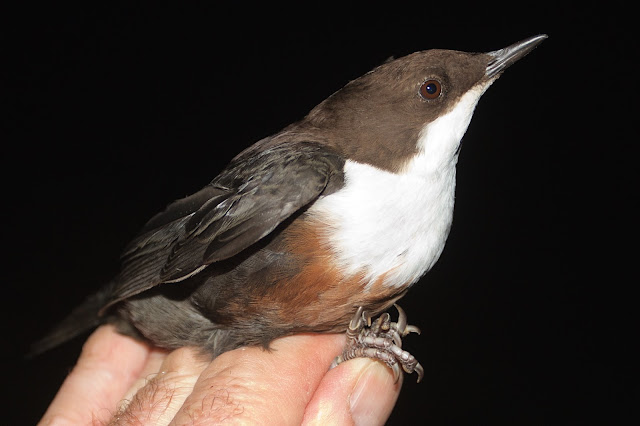 Dippers are one of my favourites, so interesting to watch when they are on the river in search of food. A friend of mine told me to try Lamping at night since he has found this to be a most effective way to catch them out of the breeding season. The same night I went out and caught this one from the first bridge I went to. After my holiday in Portugal I will looking on the ordnance survey maps for other possible bridges in my area.

The weight of my bird was 62gms and there is a clear cross over so still unable to sex the bird.

The wing length of my bird was 96mm so I concluded it was a male. 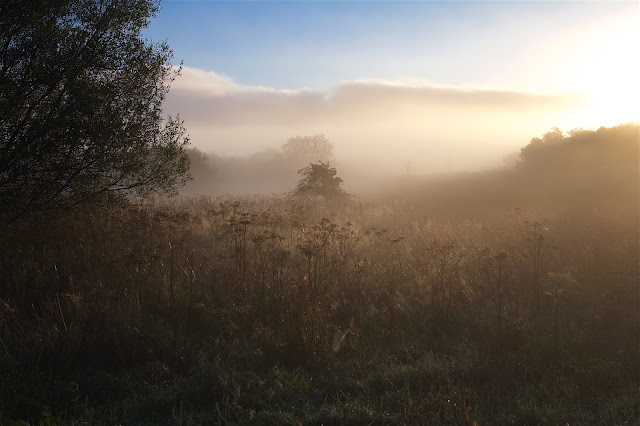 This moody Fygyn Common early morning mist was taken on 18/09/16 just as the sun was trying to come out. It eventually broke through and burnt of the mist and as a consequence the catch rate of birds was reduced 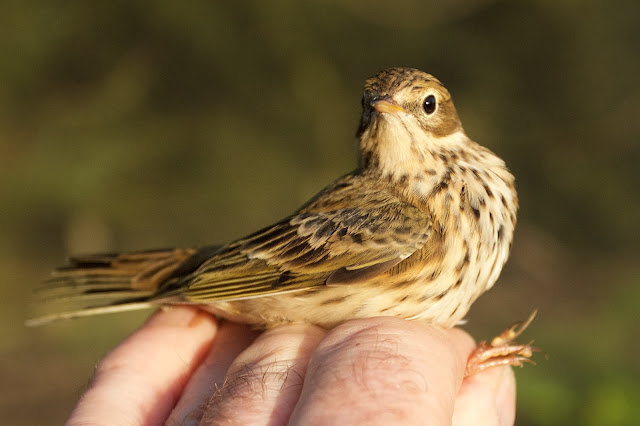 In the previous 3 years I have caught 10 Meadow Pipits in total. This year I decided to target them on Fygyn Common. The Meadow Pipit count is up to 48. 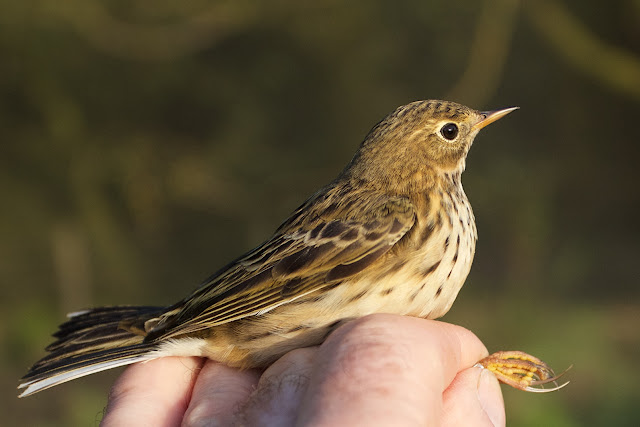 In the last 3 sessions numbers have increased each day and the last visit I caught 23 birds. The majority of the birds are caught in the first hour of daylight or a little later if the sun does not come out. After this an odd one here and there. I have caught them in two areas, one amongst the scrub  ride which has brambles and a lot of gorse and the other on longish grassy open land except for a small bush in the vee of two nets. The interest in both sites I would say is the same but the scrub seemed to give them more confidence and produced about 2/3rds of the birds.
I think the potential is there but I don't think I am getting the the most out of it other than putting extra nets up. I just hope there is still passage of birds when I get back from Portugal. 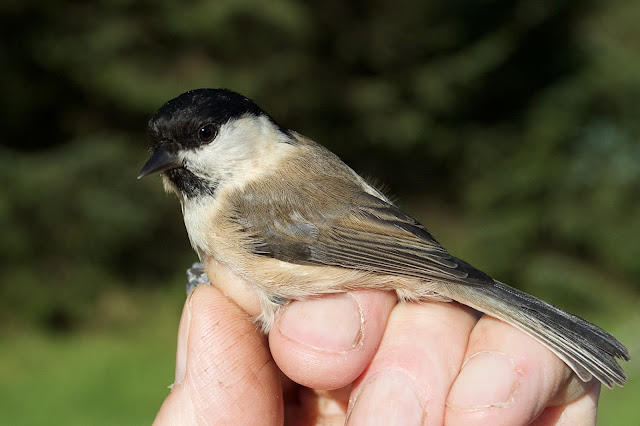 I have been lucky in as much I get Marsh Tits and Willow Tits. This bird was first caught by me in Novemebr 2014 as a juvenile of the that year. I did consider putting sound on because I could hear them calling. I didn't because it was the end of my session and I went to put the nets away and this bird found its way into one of them. 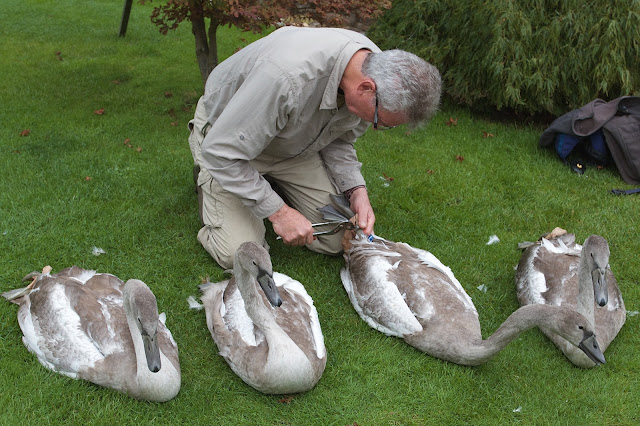 I mentioned earlier I went out with Paul Ashworth and Tony Cross who showed me how to catch and process Mute Swans. It was a very informative day on how to catch them and there are a few ways on how to do this. One is simply feeding them with bread and when they swim to feed on the bread the ringer grabs the bird around the neck. If they are out of reach and will not come closer a "Swan Hook" can be used, this looks like a Shepherds Crook on the end of a pole. Alternatively if the water is shallow and the depth is known once the birds are feeding in a corner getting in the water behind them can be successful.
When a Swan is caught the first thing that is done is to tie its legs together. We used a ladies nylon stocking which is soft and will not damage the bird. The reason for this is the Swan remains calm when the legs are tied which prevents the bird from hurting itself and also prevents the ringer from getting hurt by the Swan as well

Two rings are fitted one is a plastic ring and the other is the standard BTO ring. The plastic ring has a split and the two ends of the ring are opened and slid over the swans leg. They overlap and adhesive is applied to secure it together. These rings can be different colours and have large numbers on them which can be identified in the future with Binoculars from a distance. This saves trying to recapture the bird again. Whoever reads a ring number can report the bird seen to the BTO, often members of the public get involved with this. The BTO ring I put around the other birds leg and secured with ringing pliers in the normal way.
I was very fortunate because Paul and Tony allowed to me to ring most of the birds and out of the 22 caught I ringed 18 of them. This was a day I will remember for a long time. 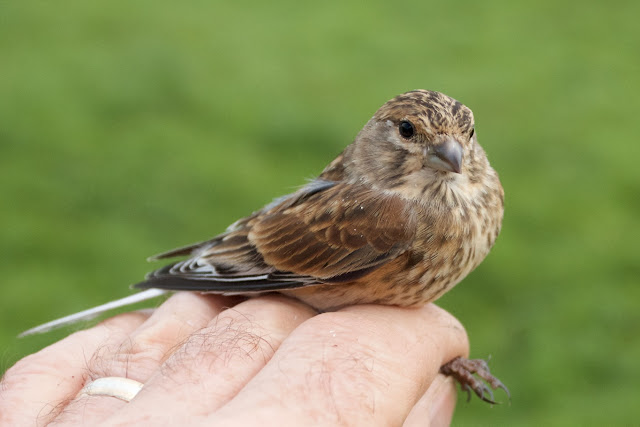 Finally one of our Teifi Group sites is at Mwnt on the Ceredigion coast. A very popular holiday area, so once the kids are back at school and the number of people on holiday have reduced we continue with the Linnet RAS project at this site.

All birds are caught with a Whoosh net and the last 3 sessions has produced well over a hundred birds most of them this years juveniles The bird in the hand is female. Sexed primarily because of the streaks on the breast of the female or the blotches which are red or pinkish brown on males Secondly is the white on the outer web of the 7th to 9th primary feathers. If the white is greater than 0.5mm away from the feather shaft the bird is a female. If it is less than 0.5mm then it is a male.


During the weeks in September I have had two Teifi Ringing Group trainees working with me. It is always a worry that bird numbers will be down and they will be disappointed. However on the 07/09/16 when Dai Stacey came along we managed to catch 24 birds and When Andrew Hughes came along on 18/09/16 we caught 40 birds. Plenty for them to get their teeth into. I hope they enjoyed the day. I certainly enjoyed their company and I was pleased how they went on during their respective morning sessions, a very positive start.

The Redstart was the highlight of the day for Dai. He aged and sexed it with confidence. I nice mix of other birds kept him thinking during the course of the morning.

Next week in Portugal but it is unlikely we will have access to the internet so probably a few words and pictures when I get back.
More information about ringing on the Teifi Marshes can be found here:
http://teifimarshbirds.blogspot.co.uk